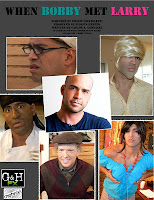 Carlos A. González, along with makeup artist Meagan Hester, is the subject of the blog Mehron Makeup News. The film When Bobby Met Larry, written by and starring González (who plays six characters, shown at left) and directed by Phil Coccioletti, is scheduled to have its NYC premiere in late January 2013. To read the blog, click here.

José Yenque can be seen again on the big screen in the film Happy New Year. Directed by K. Lorrel Manning and starring Michael Cuomo, the film premiered this past weekend in New York. For more information, click here.

Mônica Steuer and Nelson Landrieu are scheduled to star in the production of The House of the Spirits (La casa de los espíritus). Adapted by Caridad Svich from the novel by Isabel Allende, the play will be directed by José Zayas and presented in February and March 2013 at GALA Hispanic Theater in Washington, District of Columbia. For more information, click here. (Para leer más de la producción en español, haz clic aquí.)

The children's play La soberbia culebra (written and directed by Walter Ventosilla) was presented in November at York College, located in the Jamaica neighborhood of Queens. The production included live music by Carlos David Bernales, and Sully Bonnelly and Emely Grisanty in the cast.

Milteri Tucker (a 2012 HOLA Award recipient) will be dancing with her company, Bombazo, in December as a special guest of the Women in Dance Showcase at the Alvin Ailey Citigroup Theater, located in the Hell's Kitchen/Columbus Circle area of Manhattan.