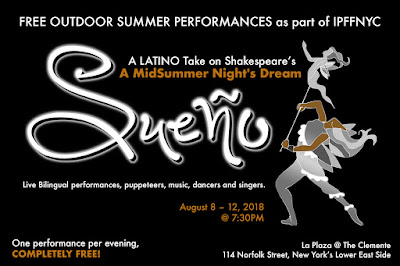 Our friends at Teatro Sea are getting ready to open the second season of their hit play Sueño: A Latino Take on Shakespeare's A Midsummer Night's Dream!


IPFFNYC is an expanded project of Teatro SEA’s Arts for All Festival/Arte Pa’ Mi Gente. After a full day of International shows, Teatro SEA will present their award-winning and revamped production, Sueño: A Latino take on Shakespeare’s – A Midsummer Night’s Dream, each evening of the festival at 7:30 PM completely free for the community. After a successful run in NYC (2015), the show traveled to Puerto Rico and was the main event of the 51st International Theater Festival. It was performed with the Philharmonic Orchestra of Puerto Rico and was staged outdoors in front the most iconic historical site in the country, El Morro. Unfortunately, after the tour in Puerto Rico, the majority of the puppets were lost at sea in transit back to NYC. We have spent the last two years revamping and improving the set, costumes and rebuilding the puppets.
Teatro SEA is excited to bring back Sueño just in time to be part of the IPFFNYC. Teatro SEA’s “Latinized” version of this theatrical classic aims is to spark interest in audiences, especially young and underserved audiences, that don’t have the opportunity to see the Shakespeare’s work. Sueño features a diverse group of 25 actors, singers, orchestra, dancers and puppeteers. The show includes over 65 carnival puppets, stilt walkers and masks including “Vejigantes and Cabezudos” … folkloric characters from Puerto Rico, used in festival celebrations. The presentation of Shakespeare’s work in Latin America dates back to the 1800s, but rarely do New Yorkers get a chance to see adapted Latino versions of the master’s plays.
For more information, please visit www.teatrosea.org or call 212 529-1545.
One performance per evening, August 8th through 12th at 7:30pm. 60 minutes (Performed in English) 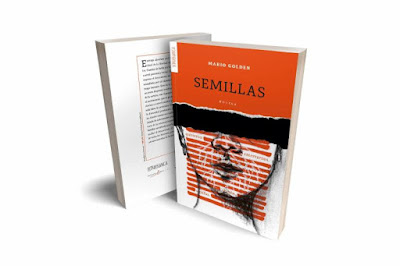 Semillas (Seeds, in Spanish) tells the story of Gabriel, a young gay immigrant activist that decides to return to his native Mexico. Fiercely idealistic, he is committed to support the struggles of the poor and very much hopes to find love.

Semillas was published by Ediciones Letrablanca, an emerging publishing house in Mexico City, where Mario grew up.

The printing of Semillas was relatively small, which means Mario's novel is being distributed mostly in Mexico for now. It can be found at the following bookstores in Mexico City: Librería Clandestina, Voces En Tinta, and Foro 37. It can also be purchased directly from Letrablanca.

In addition, the digital version can be purchased on Amazon and Google Books, and should be available soon through other platforms.