Bochinche refers to "gossip." In this sense, we use it to mention HOLA members who are getting acting and performance gigs. The names of HOLA members are in boldface. 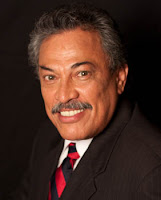 Edison Carrera, shown at right, booked a role on the film Be A Real Man (directed by Ricardo Bacallao) through an HOLA casting referral. He will also be appearing in Félix Andrade's play Made in Guasmo. Directed by Cecill Villar and produced by the Compañía de Comedias Cecill Villar, the play will have a July run at Teatro Fedenador in Guayaquil, Ecuador (note that Guasmo is a neighborhood in Guayaquil) and will also feature Villar, Mónika Gilly, Blanca Varela, José Antonio Córdova, Arturo Ramos and Byron Duque in the cast.

Vanessa Verduga and Tiffany Rothman will appear in the production Flowers: A Thorny Romance Story. Written by Carolyn M. Brown and D.E. Womack (inspired by the Paulette Kelly poem "I Got Flowers Today"), it will have a July run as part of the Midtown International Theater Festival (MITF) at the WorkShop Theater's Mainstage, located in the theater district of midtown Manhattan.

Also at the V Festival De Teatro Internacional de La Casa De La Cultura De Navarrete at the Sala Don Ivan García Guerra (in Manhattan's Washington Heights) will be Penitentes. Written by Elio Palencia and produced by Jhonny Franco and Jaime López of Teatro FénixUSA will have an August run and be directed by Josean Ortiz. The cast includes Ortiz, Anthony Cotto and William Pérez.

Enmanuel García and Santa Morel Valenzuela will be seen in Palos y ron. Written by Morel and produced by Compañía de Teatro Independiente Santa Morel, the play will be José Bonilla and will be presented as part of the V Festival de Teatro Internacional de La Casa De La Cultura De Navarrete at the Sala Don Ivan García Guerra, located in the Washington Heights neighborhood of Manhattan.