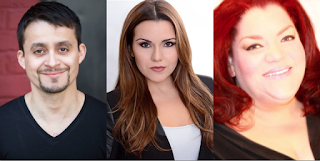 He is currently the host of "Diálogo Abierto", the Spanish-language news and talk show on BronxNet TV.  He just completed principal photography for Don’t Look, a new horror feature film directed by Luciana Faulhaber.  He is a co-executive producer of the project, and a co-founder of Enuff Productions, a film company established to nurture the work of multicultural artists. In 2011, he was also a co-producer of the Broadway revival of Godspell.

Paralleled to his acting work, he has worked as a journalist with El Diario/La Prensa, Pie Derecho Magazine, El Nuevo Día Newspaper, and Reuter’s Dollars and Sense Magazine, among other outlets. He also served as Press Officer for Governor George E. Pataki, New York State Attorney General Andrew M. Cuomo, and Bronx Borough Presidents Fernando Ferrer and Adolfo Carrión. In addition, he served as Communications Director for the Latino International Theater Festival of New York (TeatroStageFest) and the Campaign for Fiscal Equity.

He hosted the HOLA Awards for the first time in 2015. This year, he was selected as one of the recipients of the Él Award, presented by New York daily newspaper El Diario/La Prensa, for being a distinguished Latino leader in New York City. For more information about Javier E. Gómez, click here.

Évi Siskos was born in the heart of New York City to Greek and Dominican parents. An Emmy-nominated television host, she graduated with a bachelor's degree in International business and a concentration in Mandarin. Her love for languages led her to study Mandarin in Shanghai, China.

After finishing her studies, her passion for the arts led her to participate in Miss Dominican Republic Universe 2011, placing her as a finalist. This opened the door for her to pursue her dreams of television and film. Since 2011, she has been in various commercials, television programs, music videos, short films, short films.

Her first steps were in radio as co­-host of the show "NipTuck" with celebrity surgeon Dr. Steven Greenberg and "Almorzando con Cantaso". Évi has starred in TV pilots and films such as "Lower East Asides", Unicorn Sky, and Keep the Party Going. She was a part of Cosmopolitan Magazine webseries for Latinas.She has been a spokesperson for Goya Foods, for their segment "La Cocina de Goya" with their campaign, Mi Plato, promoted by First Lady Michelle Obama. She has also been the face of International brands such as Chez Handbags and Galilli Diamonds. She was also part of the main hosts of the daily entertainment show, "Acceso Total" (for which she was nominated for a New York Emmy). In January 2015, she made her theatrical debut in William Shakespeare's As You Like It, playing the leading role of Rosalind. She last hosted the HOLA Awards in 2014. For more information about Évi Siskos, click here.

Jeannie Sol was born and raised in Brooklyn, New York. Raised in a humble home, she found escape through music. She found her talent for performing through talent shows in school and in after-school centers. After winning a few contests is when her luck turned around. This is where a famous producer/promoter named Jerry Masucci (of Fania Records fame) discovered her. It was through Sony Records that Jeannie released her first albumYannet Sol and Friends. With the strength of her hit “Correr A Ti” (a Spanish-language version of Whitney Houston's "Run to You"), she toured worldwide with the likes of Ray Barretto, Celia Cruz, Grupo Niche, amongst other big bands. She then stopped in Italy and that is where she won the Miss Informissima contest in Torino, Italy. Coming back to the U.S., she hit the studios to do her second studio album Yannet Sol. During her local spots she did backup vocals for Celia Cruz, Johnny Pacheco, Sergio George, and many others. She is an exclusive backup singer for Donald Sheffey in NYC. She is currently an official member of the Lose Control Comedy Troupe, where she hones her skills of comedic timing and stage acting in theater. She most recently acted on stage in her cabaret show (titled The Jeannie Sol Show), the musical Is There Room In Your Heart?, the operetta La Llorona, In Defense of Glitter and Rainbows, and a production of William Shakespeare's The Tempest. Her roles in the Teatro SEA productions of Rafael Hernández... Romance and La Gloria have yielded her two HOLA Awards. She last performed at the HOLA Awards in 2014. For more information, click here.

The 2016 HOLA Awards will be on Wednesday, November 2, 2016 at the Flamboyán Theater, located on the first floor of The Clemente Soto Vélez Cultural and Educational Center, at 107 Suffolk Street, in Manhattan's Loísaida neighborhood, in New York City.
Posted by EL BLOG DE HOLA at 2:31 PM